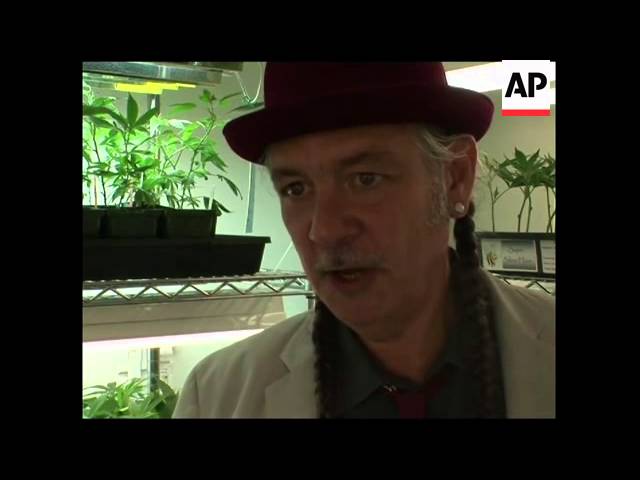 Grow
Share on Facebook
Share on Twitter
Share on Pinterest
Share on LinkedIn
(7 Sep 2010)
Oakland, California – 21 July 2010
1. Sign with cannabis buds reading (English) “Who Else Wants To Grow Bug Sugary Buds?”
2. Customer pushing shopping trolley through iGrow superstore
3. Shot inside moving shopping trolley
4. Mid of iGrow mascot board
5. Close of acidity regulators
6. Wide of iGrow superstore
7. Close of iGrow sign for lights section
8. Lights on demonstration
9. Set up shot of iGrow Co-Owner Derek Peterson
10. SOUNDBITE: (English) Derek Peterson, Co-Owner, iGrow:
“California has done a phenomenal job of regulating the dispensaries, the sales aspect of it. What has never been talked about is the cultivation and transportation. That has always been in the dark.”
11. Mid of soil bag
12. Mid of small grow operation
13. SOUNDBITE: (English) Derek Peterson, Co-Owner, iGrow:
“You see a lot of home invasion robberies, a lot of home fires, a lot of unsafe conditions. These permitted facilities will be built out in a code-friendly matter by licensed electricians, civil engineers with LEED (Leadership in Energy and Environmental Design)-certified architects and I think that’s one of the most important things for the local community.”
14. Worker watering marijuana plants at Harborside Health Center
15. Close-up of watering, zoom out to worker putting plants on shelf
16. Low angle of worker watering
17. Close-up of marijuana plant
18. Wide of worker with marijuana plants
19. SOUNDBITE: (English) Stephen DeAngelo, Executive Director, Harborside Health Center:
“If only large growers of cannabis are licensed, then all of the small and medium-sized growers would become illegal and would be forced to close and would lose their livelihood.”
20. High angle shot of worker sorting out marijuana buds
21. Close of marijuana buds
22. Close of marijuana buds being weighted
23. Close of marijuana buds being packaged
24. Close of small bags of marijuana buds
25. Wide of processing area
26. Mid of glass containers with Harborside logo
27. Close up of marijuana bud being weighted
28. SOUNDBITE: (English) Stephen DeAngelo, Executive Director, Harborside Health Center:
“To people who say that the only way to organise this industry would be with huge factories, I would ask them what Napa County (californian wine region) would look like if there were only four huge industrial vineyards. It wouldn’t be a very vibrant industry and I think the same thing holds true with cannabis.”
29. Worker stacking marijuana containers
30. Close of containers
31. Wide of containers on display
32. Close of marijuana “Purple Hash” for sale
33. Side shot of display
34. Close of marijuana “Hawaiian Red” for sale
Gropech
35. Slow pan of artist’s depiction showing large pot plantation
LEAD-IN:
After weathering the fear of federal prosecution and competition from drug cartels, California’s medical marijuana growers see a new threat on horizon.
The iGrow Superstore in Oakland, California is one of the largest of its kind in the country, offering just about everything one needs to grow medical marijuana.
They don’t actually sell marijuana (cannabis)… but that could soon change.
STORYLINE:
Four production operations are to be licensed and taxed as Oakland has moved closer to becoming the first city in the United States to authorise wholesale marijuana cultivation.
The plantations would not be limited in size – one potential applicant for a licence intends to produce over 9,525 kilogrammes of the crop a year – but they would be heavily taxed and regulated.
Supporters of the measure raised the possibility of Oakland becoming the US cannabis capital, especially if California voters approve the legalisation of recreational marijuana in November.